“Ya know, Brooky, if ya’d died, we’d have had a fabulous wake.” Stephen laughs at the recollection. There’s nothing like good mates for making light of things. Bad things happen, and when they do, laughter truly is the best medicine. “I’d have been sorry to have missed the party,” is Stephen’s rejoinder.

Stephen grew up in the vicinity of Brontë country, amid the rugged beauty of gritstone moorland and the lush recumbent dales of West Yorkshire. He developed a penchant for cycling as a young teen and scrambled regularly, which is to say he competed in motocross. He started playing rugby when he was 17 — a game he played with a vengeance until he was 39.

“We’re a rough and uncompromising lot on the field,” he says of himself and fellow rugby players. “But off field we’re nothing but big softies, aren’t we,” he looks to his wife, Barbara. And cycling, well cycling is simply a part of who he is. A gleaming Suzuki Bandit 1200cc stands in his garage. He rides whenever he can, which is often enough these days. “Some go to therapy, others go cycling.”

Life could have been different. Stephen worked construction and was on a site when the hydraulic scissor lift he was operating hit a ditch and tumbled over, pitching Stephen over the railing. “This is going to hurt,” he thought as he was falling. And it did. The fall broke his back, pelvis, and hip. The doctor told his mum and sis that it was unlikely Stephen would ever walk again.

His family and mates rallied round. There were typically four, five, six, seven people in his room at a time during visiting hours, all taking the mickey out of him. The nurses had never seen anything like it before. “My mates would try smuggling in some lager, but the nurses were on to ‘em.” The conviviality, the humour, the friendship, and the love, all had a positive effect on Stephen’s recovery.

Contrary to his doctor’s original prognosis, he can walk unaided, though not far. The distances he covers now are measured solely by the odometer on a motorbike. Walking is painful. So is sitting in a car. Hunched over the back of a cycle, arms outstretched, hands gripping the handlebars, is not.

The construction accident happened in April 2003. The following September Stephen and his mates headed for Spain, where he and Barbara fell in love. Stephen recognizes how lucky he is on every front: To have such a wonderful family and such a fine group of mates. To be able to walk after taking such a terrible, bone-shattering tumble. To still be able to ride.

In May 2008 he flew to San Diego, California, where he rented a 1500cc Harley Davidson Road King and biked north to San Francisco along the spectacular ribbon of coastal highway known as Highway 1. The trip was a dream come true. Stephen thought the Harley, however, was less than dreamy. A caption in Stephen’s photo album reads: “Harley Road King 1500cc — heavy, slow, bad handling — a load of crap really.” Stephen and Barbara live life to the fullest, in every circumstance. They call it “pushing the boat out in style.” 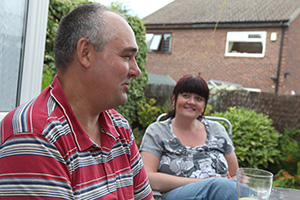