Magdalena is a self-assured, happy child with a refreshing attitude about living with spina bifida – a condition that affects the spine and nervous system. Read about her diagnosis, family life, and experiences. 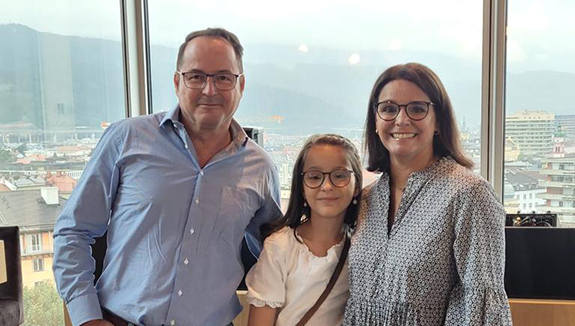 When Magdalena was born in Innsbruck, Austria, her parents Doris and Christian immediately noticed a small bruise on their baby’s back. Medics quickly diagnosed her with spina bifida.

Spina bifida is a condition that affects the spine and nervous system, and is usually apparent at birth. It can happen anywhere along the spine if the neural tube has not fully closed during fetal development. When the neural tube doesn’t close all the way, the backbone that protects the spinal cord doesn’t form and close as it should. This often results in damage to the spinal cord and nerves. Many babies with spina bifida get hydrocephalus, a build-up of extra fluid in and around the brain. A surgeon can insert a thin tube (shunt) to drain excess fluid from the brain and protect it from too much pressure.

Christian remembers those demanding first days, weeks, and months with Magdalena. “We’d hold her in our arms and wonder about her future,” he recalls. “She was in intensive care for the first 14 days and then in the regular ward; it was such a difficult time.”

Fast-forward to today and Magdalena is a confident and happy kid, with a great attitude about living with spina bifida. “We’re all just people; we don't have to be ashamed of our condition and should try to make the best of it,” she says. “I've had it for ten years now and I've managed it – so I’m sure anyone else could too!”

A journey from dependence to independence

Right from the beginning, they were supported by their wider family, as well as the nursing staff and doctors at the hospital. “Thank goodness that the right people were in the right place at the right time,” says Christian. “When you realize how much support and help there is all around you, it’s invaluable.”

In practical terms, the young parents had to manage the hour-long routines for Magdalena’s urination and defecation. They also had to deal with sleepless days and nights, and endless logging of information. Over time, however, Christian and Doris found that things got easier. In addition, Magdalena’s healthcare appointments became not nearly as frequent as they used to be.

“If you put your mind to it, if you’re strong and stick together, you can do anything” says Doris. Her pride in her daughter is obvious, as she explains how much Magdalena can do on her own. She also concedes that there are some things Magdalena can’t manage as well as other children, like running and jumping. “As a mum, that’s hard to see,” says Doris. “But I have to remember how well she’s developed and how much she can still master – and that’s just beautiful to see”.

Apart from an occasional “Why me?” Magdalena accepts that this is her life; it’s her normal. She knows she has some physical limitations. For example, when playing with her friends she can’t do somersaults, cartwheels, or handstands because being upside down risks her stent being pulled out of place.

She also has to remember when it’s time to self-catheterize. She manages the process herself, ensuring that her hands are thoroughly cleaned before and afterwards so no germs can negatively affect her bladder. Today, she has a good catheter routine. “At the beginning, I couldn’t do it right and that really annoyed me,” she says. “You just have to practice and then you'll get it.”

Though Magdalena declares herself to be “fairly quiet,” her mum is proud of how easily and openly she explains things about her condition to friends and classmates. “People around me naturally ask me questions, because they’re curious,” says Magdalena. “So I just tell them all about it."

Alexandra Fürruther is Magdalena’s nurse at the neuro-urological outpatient clinic, which sees children from an early age into adulthood and helps them learn to manage their conditions. She agrees with the plain speaking that Magdalena does so well. “It's very important to explain to the children what you're doing, no matter how old they are; you need to be straight with them and not embellish anything, “says Alexandra. “Then, over time, there comes a point where they say, ‘Alexandra, now I’d like to learn it myself...can I try?’”

“I do think Magdalena’s family is special; her parents, for example, don't keep anything from her and help her learn how to live with her condition,” says Alexandra. “And if other children are mean to her, they give her a lot of support to help her cope with it.”

Magdalena brushes off the negatives. “Mostly I’m treated the same as everyone else,” she says. “Of course, there are some people who think they’re funny and say, ‘Hey you with the diaper!’ and stuff like that – but it goes in one ear and out the other with me!” “I’ll keep leading a normal life,” she continues. “Maybe I’ll have a boyfriend later on, and maybe start a family; that would make me happy!”

Tips for parenting a child with spina bifida

Christian’s advice to parents of children with spina bifida is to trust in the future and accept all the help they can get. He also says to stay strong and active, and face the situation as positively as possible. He, Doris, and Magdalena all believe that the earlier they accepted the diagnosis and their new situation, the better they were able to deal with it.

Financial Disclosure: Magdalena’s family received compensation from Hollister Incorporated for her contribution to this article.

Hobbies, routines, experiences — your story can inspire others.